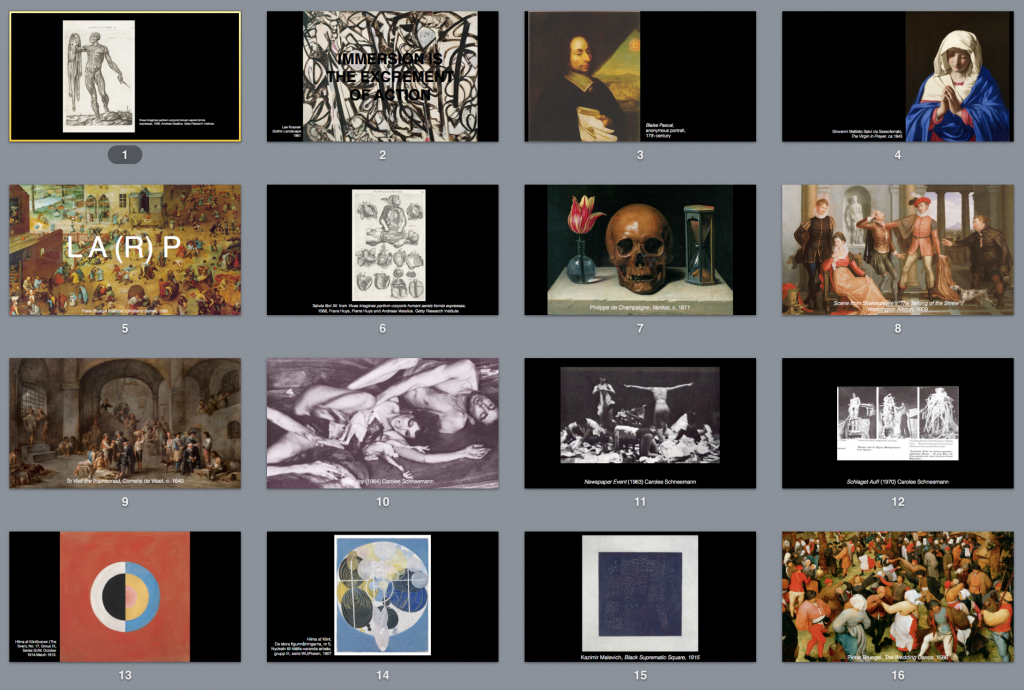 Transcription of a talk given at Knudepunkt 2015, February 14th.

Immersion is the excrement of action

I have been asked to do this talk on the subject of bodies in live action role-playing, which I’m very happy about since the body has turned centre stage in larp development and design. I have previously together with Tova Gerge, tried to examine and understand the body in live role-playing from a very simple but for many years overlooked fact – the character and the player share body. I think that is true also for table-top or freeform role-playing games, where roleplay happens through the voices of bodies. When we invocate a character, when we adjust our tone, when we invite an alien fictitious voice to appear in the cavities of our body. This is still the premiss for what I have to say today. I think Ane Marie Andesson will develop on that fact later during this session.

I titled this talk Immersion is the excrement of action, but I have over the last week realised that there are no immersionists around any more so I may be pushing at open doors. Also Martin Ericsson covered parts of this already yesterday. Anyhow what I meant by that title is that our bodies and actions has a major part to play in role-playing. I do think we are starting to understand larp pretty well from a social and psychological perspective. But maybe we are lacking a bit from the perspective of the body and maybe we have over-used psychological concepts to understand what we are doing and exaggerated our mental and cognitive capacities. One example of that would be immersion. We often describe role-playing as an activity where we immerse into a world where we are somebody else. And I don’t doubt that immersion actually exists. But I don’t think that it happens through an active psychological effort but rather as a bi-product of our bodily activities.

It’s not the case that we first immerse into our character and through immersion decide how to act within the fictitious world. It usually work the opposite way around – we act with our bodies as our characters, and immersion happens to us. Such an understanding would work along the lines of 17th century philosopher Pascal – First you go to church and you kneel in front of the cross, then you start believing in God. According to the same logic you can start believing in your character when you act it.

This reasoning made me, as a thought experiment, to put a preliminary parenthesis around the R in our beloved but clunky abbreviation LARP, LA(R)P. (This is what any obscure leninist party, so why not) What if role-playing is not the core activity in our culture, our medium, or at least, if we pretended that it was not. If we think about what we do as Live Action Play.

In larp discourse we have lended a lot of concepts from psychology but also from theatre. But thinking larp from a bodily non-role point of view could enable us to venture in two other “opposite” but also related fields – somatics (dealing with the body as experienced from within) and dance or choreography. We have used theatre concepts to elevate what we do from a subgenre of tabletop role-playing to a cultural and artistic medium, which I think is fine, but we payed a price to make this liaison with theatre which is more clear to me now than ever before.

Theatre works according to dramaturgy, escalation of conflict, tropes and representation. These more or less conscious forms, ideals, ideologies of drama enable our improvisation. The better we know how drama happens, the better role-play. This is the idea behind fate-play, etc. I have been a proponent of such a meta-conscious, theatre-oriented player. Looking behind, planning ahead. Anyone who has followed my thought on larp have noticed that. When I started to write about larp i wanted to explore the aspect of collective storytelling. The idea was that the story was the only framework that could enable, encompass, hold such a diverse activity as larping.

It’s a valid line of thought but also very limiting. From a player point of view I have many times been in the situation where I’ve played in a scenario and known what I should do to make a good story, a good scene that underlines the overarching theme of the scenario – but something has held me back. I think I’ve developed a kind of resistance to subjecting to certain kinds of narrative, reproducing the tropes and dramatic conflicts that we have internalized from Hollywood drama, Harry Potter, Battlestar Galactica, you name it.

But also in the case of politically conscious scenarios everything change once I start thinking them through the body. The aesthetic qualities of the larps change. For example, a scenario about a prison camp, or any other kind of camp, is usually framed as an exploration or critical inquiry of a power system and so on – but all I can think is – why does our bodies enjoy institutional violence so much that we enact it over and over again? It is, at least as much bodily enjoyment as mental critical inquiry involved so a question we might need in the future is Why are we organising our bodies to perform these systems?

Starting from the body

So if we don’t tune in to the pace of the story to get the action going what do we have left to hold on to? We can of course still have the rules, the agreements, the framing, the social state of exception – what in dance theory is called a score. But pacing and rhythm does not have to follow dramatic or narrative principles, they might as well flow like music or dance and repetition might be just as valid as development. We can also, and here I might sound like a hippie, listen to the pacing of our own bodies, adjust improvisation to the rhythm of our breath, waves of hormones or the beat of the heart.

And speaking of hippie – I would like to remind you that two great participatory cultures that originated from the American hippie era and later spread to the Nordic countries 1. role-playing games and 2. dance improvisation. And to me it’s fascinating when they are coming together.

So from a scenario-writing point of view, or an artistic point of view, I would be happy to make more space for scenarios where the primary goal is not to represent psychological and social conflicts between people who we are not.

But I don’t even think what I’m saying here is new. I think these kinds of scenarios where the role is secondary or even non-existing, happens all the time. I just want to underline that it happens, we already to it. We just have to acknowledge it and develop it and not marginalize it because the holy R of LARP is fading.

One way of developing our form would be to peak at the dance field. Now improvised dance has a lot in common with roleplaying, it happens in shared spaces, with certain social agreements and collective improvisation. But it has different aesthetic premisses.

First of all dance is generally non-verbal, in contrast to role-playing, which has been more influenced by the talking-heads of theatre and tv. This does not mean that there is no possibility to use the voice in dance, but maybe one would use it for other purposes.

Another key to “dance” through a larp would be to focus on the present moment, rather than the future and the past of the story. This means a scenario can be discontinuous and that the responsibility of the player is not about creating historical or narrative consistency, nor to create fertile ground for drama in the future, but to be there and listen to what is actually going on at that point in time in between the bodies at hand.

And I think it’s great that artists within the field of dance and choreography are starting to show up on slides here on main stage. Brody Condon mentioned the works of Lygia Clark, Anna Halprin and Tino Sehgal and I just want to underline that he is right in that we, as larpers, could have great benefits of exploring their work, their scores, rituals, workshops and art works.

Another tendency in dance is that it is abstract. And what do we mean by abstract? Well in art theory abstract art is considered to be object in their own right. An abstract painting does not need a symbolic relationship to anything in the human liveable world. It often seeks to create it’s own universe, with a more or less coherent alien logic. That is not just a story universe, but something which we are unable to attach meaning to according to the logic of our standard social reality.

So if one think “oh, that’s a bad painting, I can’t see what it represents”, then it’s hard to appreciate abstract art. The same goes for dance. When we see contemporary dancers move on stage we can not approach it with the question of “What are they trying to tell? What is the hidden, encrypted story? What are they representing?” because then we’ll not understand that what we see in front of us is, in itself what is important – the activity, the mobilisation of and relationships between bodies that are there.

I think this kind of expanded or alternate thinking on larp has benefited a lot from access to the black boxes that Martin Nielsen talked about yesterday. Just the fact that we start thinking from a dark void, rather than from a physical setting (be it a forest or a castle) has done something to how we create scenarios. And while we populate the black boxes and bring them to life, we should somewhere keep in mind that these spaces were created for the non-hierarchical, physical, improvised and bodily performance culture of the 60ths. They paved the way for what we can do today.

To conclude, I just want to say, that there are, still, a thousand new scenarios that remains to be created, where we can come together to live, act and play.