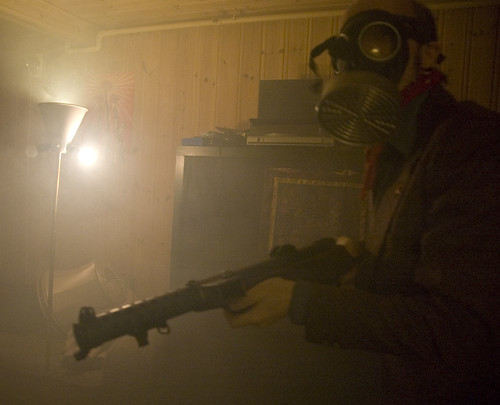 Published in lifelike edited by Gade, Thorup, 2007. Article in PDF.

Live role-playing. For the last few years we have been talking and writing a lot about the latter part of the concept. The role-playing has been the main focus. We say live role-playing developed from talking- heads tabletop role-playing games. That is of course true in a sense. But the active form that we practise also came into being because of the fact that we are a- live. So what about the live part? What does it imply and signify? What is the liveness of live role-playing? If we can do role-playing without liveness, could we do live without role-playing? What would be left of the medium?

When the participants were introduced to the scenario Limbo [1], about a “group of people from our own time and society who are hovering between life and death”, the organizer offered a relieving choice:

The scenario was set in a “waiting place to reflect on life as it has been so far, before either returning to life once again or facing the unknown on the other side of death.” For me it was an obvious choice to go for the “be yourself”, because a character would not get me any closer to the themes of the scenario than my own experiences and thoughts.

Martine Svanevik shares her experiences from the scenario in the Norwegian forum laiv.org:

“I chose to play myself, something which I realised afterwards was a choice I should not necessarily have made. /…/ On the other hand, I learned a lot about myself and how I view life/death/the afterlife. I came to the game thinking I had all the answers, but I came out of it with a totally different set of answers. /…/ I am not sure if I want to do it again, and definitely not at a game where other participants have characters. /…/ It was one of the strongest experiences in my life.” [2]

Limbo was set for strong emotional interaction and a sort of close-to-life-experience. It definitely pointed out a potential way of approaching live role-playing with less character and more liveness. I am sure there are others as well. Sometimes we could reduce character to plain social role or function.

I consider the character a tool to get in touch with a story or enter another world. It’s our ticket to the diegesis, to the fiction. Sometimes we really need it. When I played inside:outside, [3] which placed the character in “a prison where a bunch of normal people are forced to face dilemmas”, I loved my character. I wouldn’t have survived without it. The game started out with the Wolf’s Dilemma and the Prisoner’s Dilemmas and after that it only got worse. [4] Being yourself in that situation, in the company of your real friends, could have demolished friendships for ages.

Futuredrome [5] is an interesting example of how the role-playing came in conflict with liveness. Assessed as a live role-play, the event was crap. The participants interacted on a sliding scale from hardcore character immersion to hardcore off-game partying. But these two groups, and everyone in between, were definitely alive and kicking. And they actually often managed to co-exist in disharmonic unity. All of the participants were present in their acting, dancing, playful bodies, which created a common ground.

What makes live role-playing really potent is the liveness of it. Everything else is extras. The bodily experience of life, framed by an aesthetic or dramatic context – that’s what makes me tick.